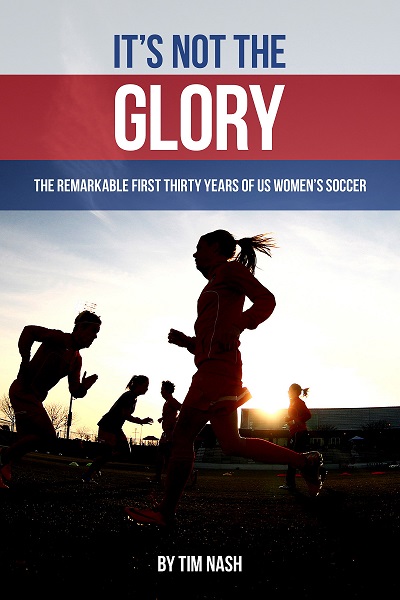 The 56th Minute, LLC is excited to announce the publication of a new book on the U.S. Women’s National Soccer Team by long-time soccer writer Tim Nash. It’s Not the Glory, the Remarkable First Thirty Years of U.S. Women’s Soccer, tells the extraordinary tale of what has become one of the most intriguing and socially relevant sports teams in history.

A skilled storyteller, Nash uses anecdotes from his observations and interviews with nearly 50 players and coaches from every generation to narrate the story from the very beginning in the mid 1980’s, through the 2015 World Cup championship.

LISTEN TO A PODCAST ABOUT THE BOOK

It’s Not the Glory explains the team’s culture of excellence through the words of those who established it and nurtured it over the years. From Heinrichs and Akers on to Overbeck, Hamm, Foudy and Lilly, through Rampone, Wambach, Morgan and Lloyd, and everyone in between, It’s Not the Glory, details the character and characters that helped the U.S. Women’s National Soccer Team have an enormous impact on society while rising to the very top of the women’s soccer world.

“Tim Nash has allowed us to not only learn about some incredibly talented athletes this country has grown to revere, but he’s also given us a rare glimpse into what makes this U.S. Women’s Soccer Team one of the most successful and endearing teams in the world,” says Lauren Gregg, the women’s national team’s assistant coach from 1989-2000.

Nash spent 17 years covering soccer in the United States. It’s Not the Glory is his fourth book on women’s soccer. He co-authored three – Training Soccer Champions, with Anson Dorrance; Standing Fast, with Michelle Akers; and The Champion Within, with Lauren Gregg.

“The story Tim Nash tells is from the beginning, when no one in the world was afraid of us, when we had never won a game, when no one in the U.S. even knew we existed, through the thrilling 2015 World Cup championship. Jump in, this book takes us on a fabulous 30-year ride!” says Anson Dorrance, who coached the USA to the 1991 Women’s World Cup title and has won 22 NCAA Championships at the University of North Carolina.

Published by Lulu Publishing, It’s Not the Glory is available at Lulu.com, amazon.com and iBooks