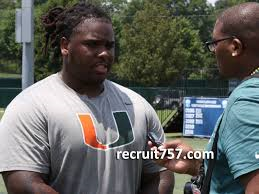 GREENSBORO — Every time Michael Wyche pulls on his Carolina Cobras football helmet, he covers the scar from where the bullet grazed his forehead.

He turned his head at precisely the right time, he says, or the bullet would have hit him in the temple. He was 12.

“I’m 25 years old now, and I sit in the house like an old man,” says the 6-foot-4, 375-pound defensive lineman as he points out another bullet scar on his massive forearm. “I’ve done so much stuff in my life, when I got to 25 I was like ‘There’s nothing left to do.’ I was in clubs at 14, I sold drugs, I shot at people and people shot at me.”

So, how do you go from selling drugs and dodging bullets in South Norfolk, Va., to earning a nice living as a motivational speaker and professional football player in Greensboro? To tell the whole story, Wyche says he needs to start before the beginning, before he was born.

He tells about the 16-year-old boy who breaks through an apartment door with a .357 magnum. Desperate and running from the police, the young man holds a 34-year-old woman hostage. She bargains with him.

“She told him, “’How about I just tell the cops I haven’t seen you? You walk out the door and keep going,’” explains Wyche.

The boy got away and returned a few days later to thank her. They talk and begin seeing each other regularly. They have a baby and name him Michael Wyche.

“That’s a true love story, right?” Wyche jokes. “I used to be afraid to tell that story — ‘Your momma and daddy met how?’”

When Michael was four, his father went to jail for 40 years and his mother was hooked on crack. Michael was left to find his own way, and the way to survive in South Norfolk, he says, involved gangs, drug, guns and crime.

He was just five when he fired a gun for the first time. He was homeless by 10 and a full-blown criminal by 11.

Wyche and his mother bounced around from Chesapeake, to Norfolk, to Virginia Beach, to Hampton, to Newport News to Suffolk. He was enrolled in 22 different elementary and middle schools, but rarely went.

“When I was about 10, my mother was on drugs bad,” he says. “She was selling my shoes, our TV, my video game system. We got evicted, and we were sleeping on people’s couches, homeless shelters, or in the park. I would sleep in a drainage pipe in case it rained.”

One night, his mother said she had to go to the store. She never came back. At 10 and in the care of social services, Wyche was selling drugs on the street. By the time he was 11, he had his first gun.

“I started hanging with the guys on the block” he says. “I started robbing people, selling drugs and breaking into houses for a living. We were making a lot of money.”

He was charged with attempted murder when a rival got shot in the head. The charge didn’t stick, though.

“But I was in and out of jail a lot,” he says. “I didn’t really care. I couldn’t go to public school. I was too bad. They put me in an alternative school. I was a monster until I met Alexander.”

“I loved basketball, but he told me I should play football,” says Wyche. “I was like, ‘Man, leave me the hell alone.’ But he came to me every day. Every single day. He made me start doing 300 pushups a day, 600 body squats. Every day at recess, I was doing workouts.”

But Michael was still struggling in school until the teachers at the alternative school discovered one of his closely guarded secrets.

“I was illiterate,” he says. “Every time I was called on in class to read, I would throw a desk or a chair, and they would send me to the office. I didn’t want to be embarrassed in class.”

Another teacher at the school, Donna Notti, taught Wyche to read. Soon he was on the honor roll and was allowed to go to Oscar Smith High School in Norfolk, where he helped the Tigers win the state championship.

After graduating from high school, Wyche got as far away from Norfolk as he could.

He enrolled in East Los Angeles Junior College and earned JUCO Defensive Player of the Year honors in 2014.

“Defensive Player of the Year. Two-time All-American, and I was sleeping in the locker room,” he says. “I was eating one meal a day. But I was going to be able to go to any college I wanted. I called my mother to tell her. ‘I made it mom!’

“When I called my mother, they told me she was going to be passing away soon. She had cancer.”

The doctors told Wyche it was his decision whether or not to take her off life support. He flew five and half hours home.

“When I looked at my mom in the casket, I told her I was going to make it to the NFL.”

He went to the University of Miami on a full ride and earned a bachelor’s in psychology. Last season, the Green Bay Packers gave him a contract. This year, he is with the Cobras in the National Arena League hoping to get another shot at the NFL. 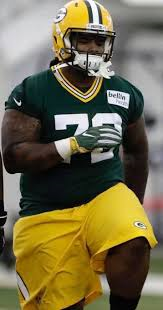 “On the football field, I think about everything I’ve been through,” he says. “When I put on my helmet, it’s like a flick a switch. I play like the life I’ve led – violent.”

Wyche makes a nice living as a motivational speaker, a career that spawned from one day in high school when he was encouraged to tell his story at an assembly.

“I didn’t know what I was doing so I just told my story,” he says. “After the speech, a girl came up to me in tears. She said, ‘I had decided I was going to kill myself today until I heard you.’

“Saving a life is way better than a sack or a tackle any day.”

He speaks at Mega Churches, colleges, prisons, high schools, teams. He talks about choices and circumstances, and most importantly hope. And he talks about the reasons he did it all.